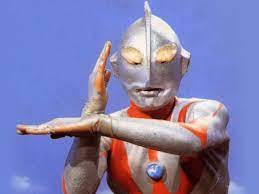 In 1966, Eiji Tsuburaya, the special effects genius behind the Godzilla movies, produced a TV show called “Ultra Q”, a spiritual predecessor to X-Files, about a team of scientists and reporters investigating giant monsters and other SciFi mysteries. It was wildly popular, and the network immediately asked for more. So Tsuburaya retooled the series and, on July 10, 1966 – Eiji Tsuburaya’s birthday – Ultraman was born!

An alien hero from the M78 Nebula, Ultraman arrives on Earth pursuing an enemy monster. It collides with a ship piloted by Hayata, a member of Earth’s Science Patrol, accidently killing the pilot. To repay this debt, Ultraman bonds with Hayata and together they fight alien monsters as the titanic hero ULTRAMAN!

This show was a formative program in my youth. Afternoons were spent at my baby sitter’s house driving her crazy by singing along with the theme song and mimicking the monster fights. And the effect was the same on an entire generation of Japanese kids, who did the same. This show spawned dozens of sequels, connecting into a multiverse of amazing storytelling.

So on July 10th we celebrate Eiji Tsuburaya and his OTHER amazing accomplishment. SSSSSHHHHHAAAAA!!!