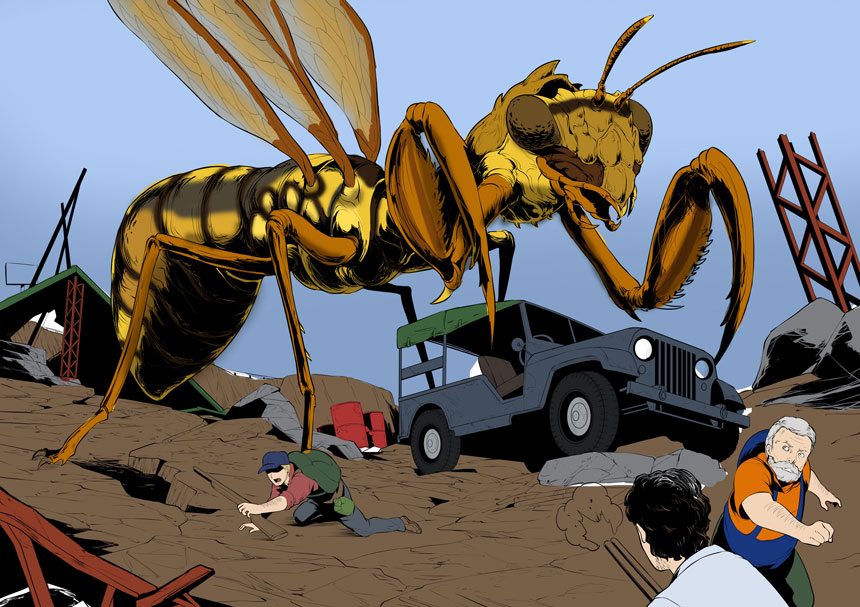 On this July 4th, American Independence Day in the United States, we look at the Fate of America in the MvK world!

“I am become death, the destroyer of worlds.”
Dr. J. Robert Oppenheimer quoted these fateful words as he witnessed the Trinity Bomb. But what form would that death take? In Asia the nuclear genie spawned gargantuan kaiju; in China unchecked radiation turned humans into monsters; but in North America the atomic terror came in the form of the tiniest of creatures: the insects. While Japan fell victim to the radioactive experimentation of outside forces, the United States nearly destroyed itself through rampant atom bomb testing within its own heart.

At the end of WWII America had The Bomb, and everyone wanted the secret. Whether through independent research or espionage, other nations unlocked the secret of the atom, and the US rushed to invent “The Super Bomb” of thermonuclear fusion by performing hundreds of above and below ground nuclear tests during the 1950s. But while they only intended to test weapons, they were also inadvertently testing the effects of atomic mutation on biological organisms.

By the end of the 1950s the promise of the atom had turned into a nightmare, as the American heartland lie gutted by swarms of gigantic insects and reduced to a no-man’s land, inhabited only by those too hearty or headstrong to leave. Today these brave soldiers, united into the Continental Rangers and the First Nation of the Native American Tribes, are all that stand between the rest of the “United” States and an apocalyptic swarm that would consume the nation.

The first warning note was the discovery of a nest of giant ants in Nevada in 1954. They were destroyed before they could cause more than a handful of deaths, but researchers could not understand how they had come to be. Politicians saw it as a Communist plot, like the giant monster attack on Tokyo in 1953, and demanded the only safeguard was to accelerate atomic testing. Over the next four years giant spiders, grasshoppers, and mantis would attack everywhere from San Francisco to New York. America was under siege.

While people around the world called for a halt to nuclear testing, the US atomic energy agencies, sensing their time may be limited, began a rapid expansion of their testing. In 1957-58 alone there were 33 nuclear tests. Finally in 1958 the major nuclear powers agreed to a moratorium on above-ground nuclear testing, set to go into effect in three months time. The United States spent those months detonating 30 nuclear weapons in Nevada. It was this act of hubris that triggered the greatest disaster in American history.

As 1959 dawned the American heartland exploded. Colonies of “mutigiants”, ants, huge carnivorous spiders, millipedes the length of freight trains, and swarms of immense locusts all descended on Nevada, Utah, Arizona, New Mexico, Wyoming, and southern Idaho. At first only active during the daylight hours, as the weather warmed they became more and more energetic and dangerous. The military mobilized, but they were hard pressed to stop the thousands of creatures that were devouring everything in their path.

Death of the Southwest

As people evacuated, whole regions of the country were denuded of human life. Nevada was the first state to be completely depopulated, as caravans of refugees fled west towards California. The Sierra mountain range provided a natural barrier for the monsters, and Army Rangers were able to hold the line and keep the Golden State safe. Meanwhile, the insect horde spread east and south, devastating the plains of Utah, Colorado, and Wyoming, consuming over half the livestock in the US.

The military tried desperately to hold the line against the onslaught, but every barricade was overcome, or worse circumvented as insects flew, bounded, and burrowed past countless defensive lines. By the summer of 1959 President Eisenhower declared a state of emergency and ordered the entire midwest of the United States evacuated of civilian personnel. To the shock of the world, the region between the Sierra mountains and the Mississippi River became the kingdom of the mutigiants.

The new border was held by geography in the east and west, Army Rangers in the north, and Texas Rangers and Mexican Federal Police volunteers in the south. These formed the core of the Continental Rangers, a federal military force tasked with defending the “Central Control Region”.

Birth of the First Nation

Two groups refused evacuation orders: the Mormons of Salt Lake City, and the Native Americans of the Great Basin, Mountains, and Great Plains. While Mormons built their holy city into a fortress, the Native American had another offer: to return to the land abandoned by the United States and create from it a sovereign nation. They would fight the mutigiants from within, protecting the remainder of the United States, in exchange for a homeland. In 1962 President John F. Kennedy signed into law the “First Nation”. It cost him reelection, but for the rest of his life Senator John Kennedy would say it was his proudest accomplishment.

But while it was politicians who created the new nation, it was people who built it.

Today the United States prospers as much as any nation can in a world with the kaiju. US Navy forces in the Pacific are responsible for convoy protection, like British forces in the Atlantic. The Colonial Rangers staff the CCR border and work in conjunction with the First Nation and the Mormon State to keep mutigiant populations down. And they work in concert with the southern nations to build a strong joint American defense league, just as Europe and Africa have.

to find out more join the